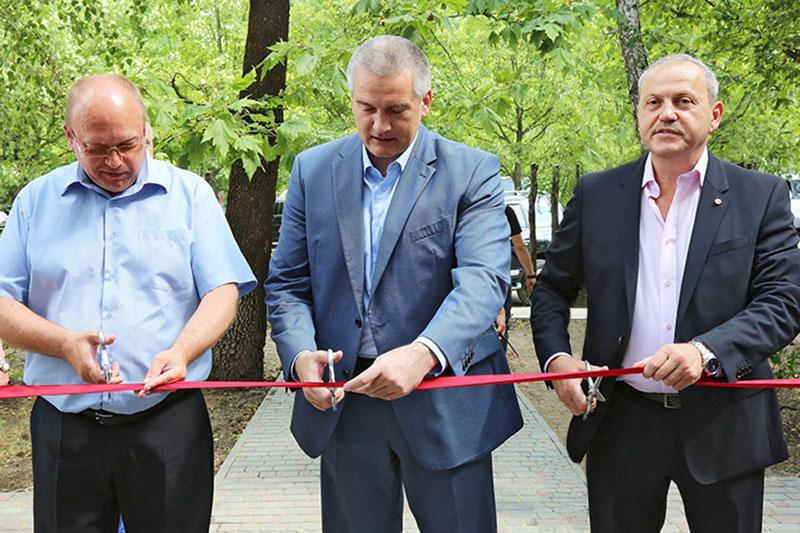 Opening of a new bottling chamber and brand store

Head of the Republic of Crimea Sergey Aksyonov participated in the ceremonial opening of a new bottling chamber and brand store of JSC «Beer & Soft Drinks Plant «KRYM», having cut the red ribbon symbolically.

Sergey Aksyonov visited the production area where the ceremonial launch of a new bottling chamber was held.

According to Alexey Khmelnitsky, oncoming of hot weather caused 2.5 increase in demand for products of the integrated BSP «KRYM». While a growing trend for consuming still soft water and sparkling sweet beverages was noted. Presently, the enterprise is bottling 60% of beer and 40% of non-alcoholic products. «Today we have opened a completely new PET bottle filling workshop with capacity of 14 thousand bottles per hour. We bought this equipment in Asia-Pacific region, and it is one of the most up-to-date in the world and fully-automatic», said the General Director.

Setting of a new bottling chamber of JSC «Beer & Soft Drinks Plant «KRYM» into operation will secure additional product supplies and provide Crimea citizens with extra jobs. The rated line performance capacity comprises 14 thousand bottles per hour. The production floor space is 1152 square meters. The line costs over 230 million roubles. The line will release products of 1 and 2 liter volume as well as a new bottle of 1.5 liter volume. In the nearest future, the enterprise is planning further development of production and expansion of its line of beer and soft drinks.

The brand store of JSC «Beer & Soft Drinks Plant «KRYM» is situated in the brewery building at 12 Geroev Stalingrada. In the store, one can buy souvenir gifts and brand glasses. Besides, in the store the prices for products of the brewery are considerably lowered.